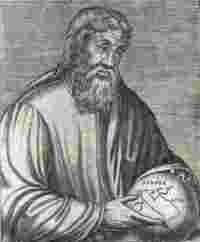 Strabo definitely considered Macedonians as Greeks. Here are some of his texts:

“There remain of Europe, first, Macedonia and the parts of Thrace that are contiguous to it and extend as far as Byzantium; secondly, Greece; and thirdly, the islands that are close by. Macedonia, of course, is a part of Greece, yet now, since I am following the nature and shape of the places geographically, I have decided to classify it apart from the rest of Greece and to join it with that part of Thrace which borders on it and extends as far as the mouth of the Euxine and the Propontis. Then, a little further on, Strabo mentions Cypsela and the Hebrus River, and also describes a sort of parallelogram in which the whole of Macedonia lies.”

“And even to the present day the Thracians, Illyrians, and Epeirotes live on the flanks of the Greeks (though this was still more the case formerly than now); indeed most of the country that at the present time is indisputably Greece is held by the barbarians — Macedonia and certain parts of Thessaly by the Thracians, and the parts above Acarnania and Aetolia by the Thesproti, the Cassopaei, the Amphilochi, the Molossi, and the Athamanes — Epeirotic tribes.”

“What is now called Macedonia was in earlier times called Emathia. And it took its present name from Macedon, one of its early chieftains. And there was also a city emathia close to the sea. Now a part of this country was taken and held by certain of the Epeirotes and the Illyrians, but most oii by the Bottiaei and the Thracians. The Bottiaei came from Crete originally, so it is said, along with Botton as chieftain. As for the Thracians, the Pieres inhabited Pieria and the region about Olympus; the Paeones, the region on both sides of the Axius River, which on that account is called Amphaxitis; the Edoni and Bisaltae, the rest of the country as far as the Strymon. Of these two peoples the latter are called Bisaltae alone, whereas a part of the Edoni are called Mygdones, a part Edones, and a part Sithones. But of all these tribes the Argeadae, as they are called, established themselves as masters, and also the Chalcidians of Euboea; for the Chalcidians of Euboea also came over to the country of the Sithones and jointly peopled about thirty cities in it, although later on the majority of them were ejected and came together into one city, Olynthus; and they were named the Thracian Chalcidians.”

“When the Euboeans were returning from Troy, some of them, after being driven out of their course to Illyria, set out for home through Macedonia, but remained in the neighborhood of Edessa, after aiding in war those who had received them hospitably; and they founded a city Euboe”

“From its melody and rhythm and instruments, all Thracian music has been considered to be Asiatic. And this is clear, first, from the places where the Muses have been worshipped, for Pieria and Olympus and Pimpla and Leibethrum were in ancient times Thracian places and mountains, though they are now held by the Macedonians;”

“….and again, of the Epeirotes, the Molossi became subject to Pyrrhus, the son of Neoptolemus the son of Achilles, and to his descendants, who were Thessalians. But the rest were ruled by men of native stock.”

“It is said that Orestes once took possession of Orestias — when in exile on account of the murder of his mother — and left the country bearing his name; and that he also founded a city and called it Argos Oresticum.”

“After having described as much of the western parts of Europe as is comprised within the interior and exterior seas, and surveyed all the barbarous nations which it contains, as far as the Don and a small part of Greece, [namely, Macedonia,] we propose to give an account of the remainder of the Helladic geography. ”

“…but after they had intrusted to Lycurgus the formation of a political constitution, they acquired such a superiority over the other Greeks, that they alone obtained the sovereignty both by sea and land, and continued to be the chiefs of the Greeks, till the Thebans, and soon afterwards the Macedonians, deprived them of this ascendency”

“The veneration for this god prevailed so strongly among the Greeks, that the Macedonians, even when masters of the country, nevertheless preserved even to the present time the privilege of the asylum, and were restrained by shame from dragging away the suppliants who took refuge at Calauria

“The Acarnanians, and the Ætolians, like many other nations, are at present worn out, and exhausted by continual wars. The Ætolians however, in conjunction with the Acarnanians, during a long period withstood the Macedonians and the other Greeks ”

“At any rate, Polybius, who had visited the city, is disgusted with the state of things then existing; and he says that three classes inhabited the city: first, the Aegyptian or native stock of people, who were quick-tempered and not inclined to strife; and, secondly, the mercenary class, who were severe and numerous and intractable (for by an ancient custom they would maintain foreign men-at‑arms, who had been trained to rule rather than to be ruled, on account of the worthlessness of the kings); and, third, the tribe of the Alexandrians, who also were not distinctly inclined to civil life, and for the same reasons, but still they were better than those others, for even though they were a mixed people, still they were Greeks by origin and mindful of the customs common to the Greeks. ”

There are also some Greek cities in Media, founded by the Macedonians, among which are Laodiceia, Apameia and the city near Rhagae, and Rhaga itself, which was founded by Nicator. By him it was named Europus, but by the ParthiansArsacia; it lies about five hundred stadia to the south of the Caspian Gates, according to Apollodorus of Artemita.