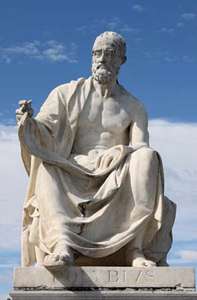 While wintering in Macedonia Philip spent his time in diligently levying troops for the coming campaign, and in securing his frontiers from attack by the barbarians of the interior.

8 Antiochus, surnamed the Great, he whom the Romans overthrew, upon reaching Chalcis, as Polybius tells us in his 20th Book, celebrated his wedding. He was then fifty years old, and had undertaken two very serious tasks, one being the liberation of Greece, as he himself gave out, the other a war with Rome. He fell in love, then, with a maiden of Chalcis at the time of the war, and was most eager to make her his wife, being himself a wine-bibber and fond of getting drunk. 3 She was the daughter of Cleoptolemus, a noble Chalcidian, and of surpassing beauty.

There are several peninsulas jutting out from Europe, and Polybius has given a better description of them than Eratosthenes, but not an adequate one. 12 The latter says there are three, that which runs down to the Pillars and is occupied by Spain, that running down to the Straits and occupied by Italy, and thirdly that terminated by Cape Malea and comprising all the peoples between the Adriatic and the Euxine and Tanaïs. 13 Polybius agrees about the two first, but makes the third that reaching to Malea and Sunium, occupied by the whole of Greece, by Illyria and parts of Thrace, the fourth being the Thracian Chersonese, on which is the Strait between Sestus and Abydus, inhabited by Thracians, and the fifth that of the Cimmerian Bosporus and the mouth of the Palus Maeotis.

Antiochus traversed the worst part of the road in the manner I have described, safely but very slowly and with difficulty, only just reaching the pass of Mount Labus on the eighth day. 2 The barbarians were collected there, convinced that they would prevent the enemy from crossing, and a fierce struggle now took place, in which the barbarians were forced back for the following reason. 3 Formed in a dense mass they fought desperately against the phalanx face to face, but while it was still night the light-armed troops had made a wide detour and occupied the heights in their rear, and the barbarians, the moment they noticed this, were panic-stricken and took to flight. 4 The king made every effort to restrain his men from continuing the pursuit, summoning them back by bugle-call, as he wanted his army to descend into Hyrcania unbroken and in good order.

Philip, then, is but the nominal pretext of the war; he is in no kind of danger; but as he has for allies most of the Peloponnesians, the Boeotians, the Euboeans, the Phocians, the Locrians, the Thessalians, and Epirots, you made the treaty against them all, the terms being 5 that their persons and personal property should belong to the Romans and their cities and lands to the Aetolians. 6 Did you capture a city yourselves you would not allow yourselves to outrage freemen or to burn their towns, which you regard as a cruel proceeding and barbarous; 7 but have made a treaty by which you have given up to the barbarians the rest of the Greeks to be exposed to atrocious outrage and violence.

“For on many occasions when I and the other Greeks sent embassies to you begging you to remove from your statutes the law empowering you to get booty from booty, you replied that you would rather remove Aetolia from Aetolia, than that law.”

Polybius “The Histories”, 18.4.8.  Philip V of Macedon using the term “I and the other Greeks” regarding the fate of Aetolia.