"Ptolemy himself perished in the fighting, and the Macedonian losses were heavy. But once more the Celts lacked courage to advance against Greece, and so the second expedition returned home" 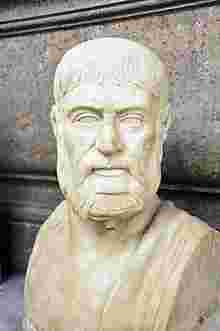 Pausanias, in his “Description of Greece”, basically includes the Macedonians among the rest of the Greek tribes:

They say that these were the clans collected by Amphictyon himself in the Greek assembly… The Macedonians managed to join and the entire Phocian race… In my day there were thirty members: six each from Nikopolis, Macedonia, and Thessaly – and from the Boeotoi that were the first that departed from Thessalia and that’s when they were called Aioloi – two from each of the Phokeis and Delphi, one from the ancient Dorida, the Lokroi send one from the Ozoloi and one from the ones living beyond Evoia, one from the Evoeis. From the Peloponnesians, one from Argos, one from Sikion, one from Korinthos and Megara, one from Athens…

later they added sinorida (race between two-horse-chariots) and horse-riding. In sinorida Velistichi from Makedonia, a woman of the sea, and Tlipolemos Likion were proclaimed victors, he at the 131st Olympiad and Velistichi, in sinorida, at the third Olympiad before that (128th)…

Of the tombs, the largest and most beautiful are that of a Rhodian who settled at Athens, and the one made by the Macedonian Harpalus, who ran away from Alexander and crossed with a fleet from Asia to Europe. On his arrival at Athens he was arrested by the citizens, but ran away after bribing among others the friends of Alexander. But before this he married Pythonice, whose family I do not know, but she was a courtesan at Athens and at Corinth. His love for her was so great that when she died he made her a tomb which is the most noteworthy of all the old Greek tombs.

Besides, Lysimachus was surely aware that they were the ancestors not of Pyrrhus only but also of Alexander. In fact Alexander was an Epeirot and an Aeacid on his mother’s side, and the subsequent alliance between Pyrrhus and Lysimachus proves that even as enemies they were not irreconcilable. Possibly Hieronymus had grievances against Lysimachus, especially his destroying the city of the Cardians and founding Lysimachea in its stead on the isthmus of the Thracian Chersonesus.

Such was the history of Lysimachus. The Athenians have also a statue of Pyrrhus. This Pyrrhus was not related to Alexander, except by ancestry. Pyrrhus was son of Aeacides, son of Arybbas, but Alexander was son of Olympias, daughter of Neoptolemus, and the father of Neoptolemus and Aryblas was Alcetas, son of Tharypus. And from Tharypus to Pyrrhus, son of Achilles, are fifteen generations.

the most important of his achievements until he waged war against the Romans,  being the first Greek we know of to do so.

Ptolemy himself perished in the fighting, and the Macedonian losses were heavy. But once more the Celts lacked courage to advance against Greece, and so the second expedition returned home.